I was very fortunate to study Russian language at St. Louis University High School for the first two years of my high school career. To compound the blessing, my teacher was Mr. Gregory Morris, who spoke beautiful Muscovite Russian and taught us as much about the culture as he did the language.

This was in the mid-to-late eighties, just before the collapse of the Soviet Union. Ronald Reagan was warming up to Mikhail Gorbachev, but the Cold War was still kind of a thing. Unless you had plans to become a spy, learning Russian was viewed as slightly suspect and vaguely un-American. I remember relatives joking that I was a communist. As an angst-ridden adolescent, I bristled at these jibes.

My fascination with the language and culture deepened when Mr. Morris played Vladimir Vysotsky records in class. I’m still a devoted fan of the departed Russian bard, whose pronounced emphasis on consonants lent a biting edge to his subversive poetry.

Our beloved instructor would also describe food we could only dream of, since there were no Russian restaurants in town for a culinary outing. And, he told us about kvas. At that time, the Slavic summertime thirst quencher was sold everywhere in Soviet cities, and produced at home in the villages. Made by soaking, then fermenting day-old bread with sugar and yeast, kvas has been around since the Middle Ages. Early written mention dates to around 1000 AD, and since it’s lightly fermented with a low pH, it was far safer to drink than water.

In modern times, kvas vendors roamed the streets with yellow tanks on wheeled carts. Before the ubiquity of plastic, you’d pay a few kopeks for kvas dispensed directly from the tank into a glass made of — glass! After quaffing the beverage, you would return the glass to the vendor for washing and reuse by the next customer. 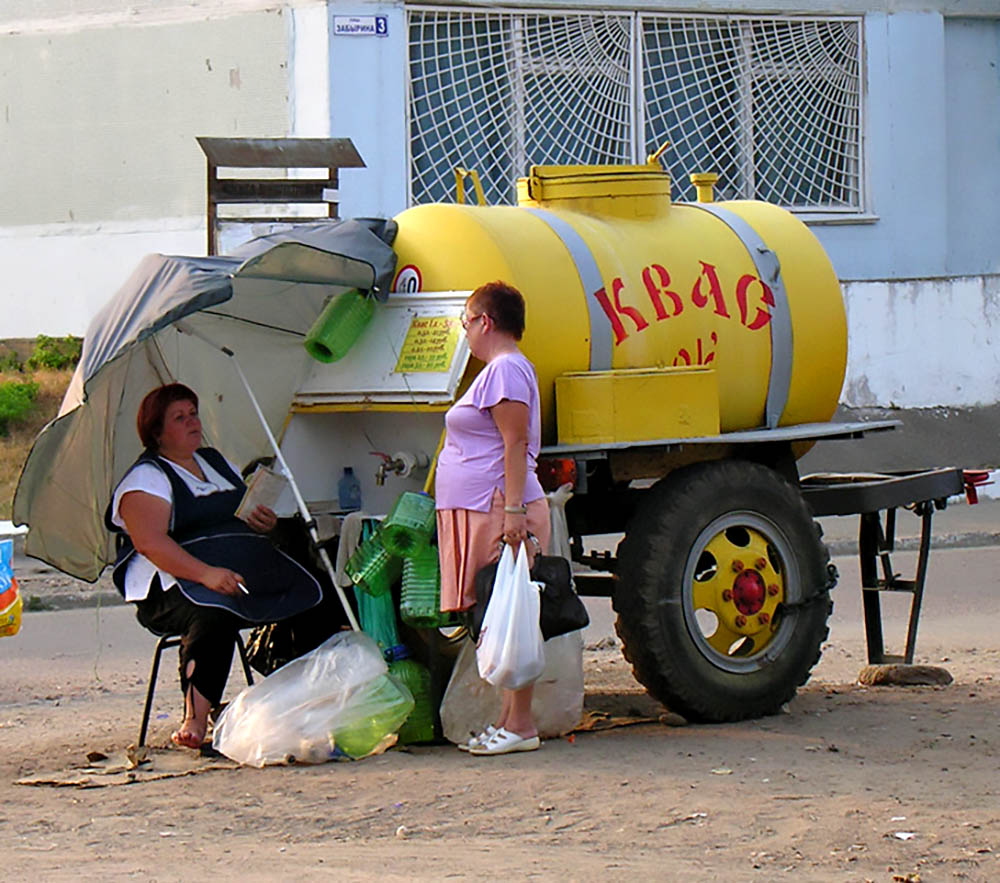 Though fermented, kvas is essentially non-alcoholic, with an alcohol content ranging from 0.05 – 1.0%. In other words, it’s about as boozy as soy sauce or non-alcoholic beer, and less so than its cousin, kombucha. The flavor of modern, commercially produced kvas is much sweeter than the traditional stuff, but it still retains the characteristic sour, thirst-quenching notes of the real deal. If Alla from Alla’s Yummy Food can show you how to do it in three minutes, then you have no excuse for not trying to make it at home.

The canned kvas pictured at top is from Lithuania’s Gubernija Brewery, one of the oldest breweries in the world. Gubernija mainly produces beer, but the Slavic beverage market’s nostalgic cravings for kvas have led to increased production of the refreshing non-beer in the last 20 years. Commercially produced kvas is not only sweeter, but also more effervescent than homemade, as evidenced in my pouring demonstration. I believe this is to titillate increasingly Westernized palates.

You can find commercial kvas at finer international and Eastern European supermarkets, such as Jay International and Global Foods in the St. Louis metro area. It’ll do in a pinch, but you really should try making it yourself. The homemade stuff has more of the sour, vitamin-rich flavor profile you want for kvas-based recipes, such as okroshka, a chilled Russian vegetable soup.

My recipe for okroshka is right here.