We don’t have a large Hungarian population in St. Louis, so the really good homemade-quality sausages are somewhat out of reach. We do, however, have access to some commercially produced Hungarian charcuterie at international supermarkets. Jay International on South Grand and Global Foods in Kirkwood come to mind. I picked up this one-pound package of Bende Gyulaí Kolbasz at Jay International for about $5. 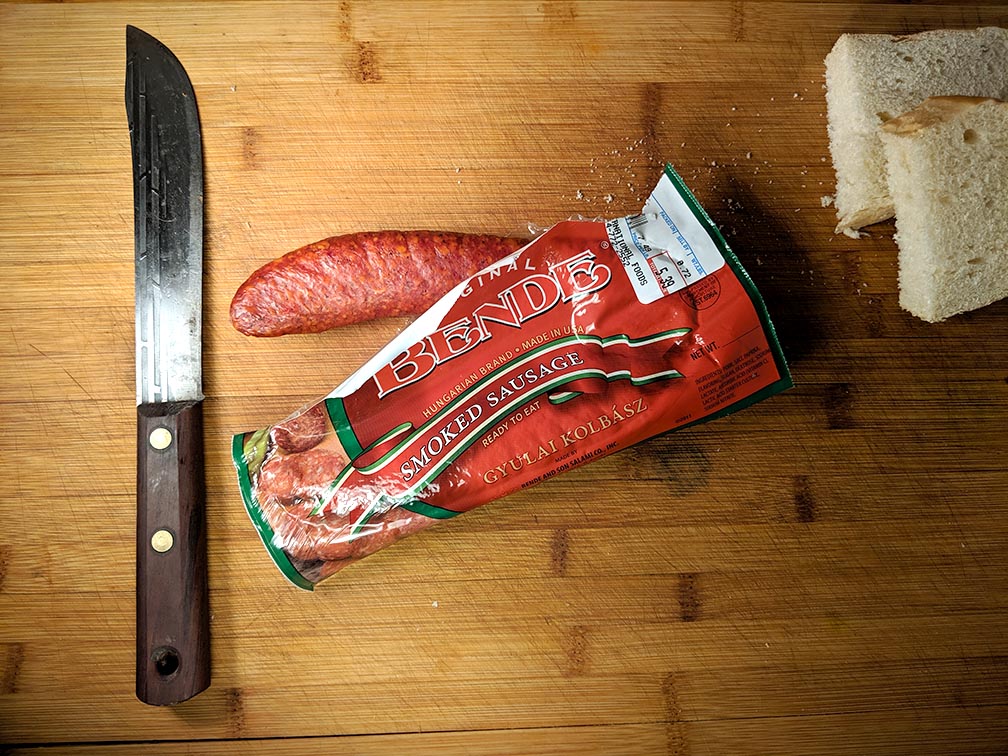 Kolbasz is the Hungarian word for sausage. Amateur linguists will note the word’s similarity to the Polish kiełbasa, Serbo-Croatian kobasica, Russian kolbasa, and Slovenian klobasa.

Gyulaí kolbasz is a classic Hungarian sausage from, as the name implies, the town of Gyula, which is not far from the Romanian border to the east. This semi-dry smoked sausage consists of coarsely ground pork shoulder and fat, garlic, paprika, black pepper and caraway seed. Once smoked, cured and dried, it can be eaten like salami, grilled, or incorporated into recipes. It happens to be my favorite sausage, near and dear to my heart because it was one of the first sausages I made. The caraway seed really sets it apart from the competition. 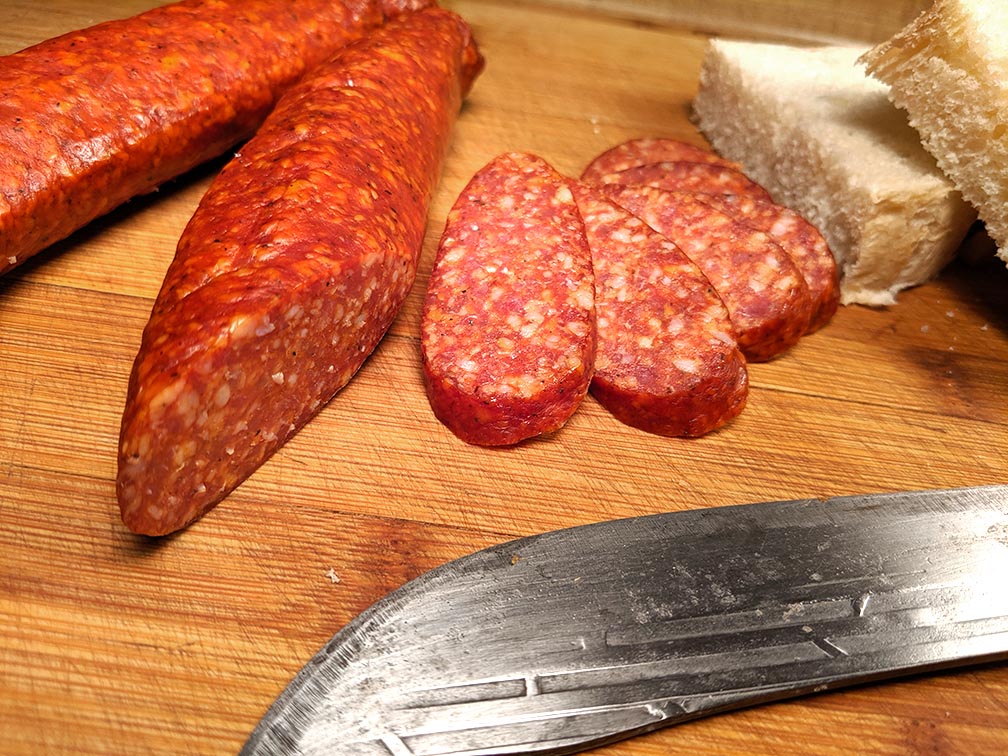 The Bende family tradition began in 1935 when Miklos Bende opened his first supermarket and butchery in Hungary in 1935. He expanded to operate several locations in Budapest before immigrating to the United States in 1956, and the family returned to its meat cutting roots when they opened the first Bende store in Chicago’s Burnside neighborhood. Several stores followed, and the family’s reputation for outstanding traditional smoked meats continues to this day. You can even mail order Bende smoked meats from their website.

Now, Bende’s Gyulaí kolbasz is not like the “country” stuff I used to make when I sold smoked meats out of a briefcase in Portland.  The consistency of commercially-produced sausages is… Well, it’s very consistent. For sausage connoisseurs this can suggest a lack of character. The grind is finer. You’re not going to bite into decadent lumps of pork fat, a whole caraway seed or a hunk of garlic in commercially produced sausages, but Bende’s Gyulaí kolbasz is still a faithful rendition of a world-class recipe. It has a pleasant lactic acid tang, suggesting that some degree of fermentation occurs during manufacture. Malolactic fermentation is good in sausages, mind you.

I like to scramble Gyulaí kolbasz into eggs, just as some would do with ham. Dice the sausage and saute it in a little butter or oil in a non-stick skillet. On a recent occasion I did just that, then jacked up the saute a little further with sliced mushrooms, green onion and chopped parsley.

When all the flavors have combined, and you have what looks like a good foundation for a pasta dish, add your beaten eggs and stir gently with a rubber spatula over a very low flame until the preferred consistency is attained. 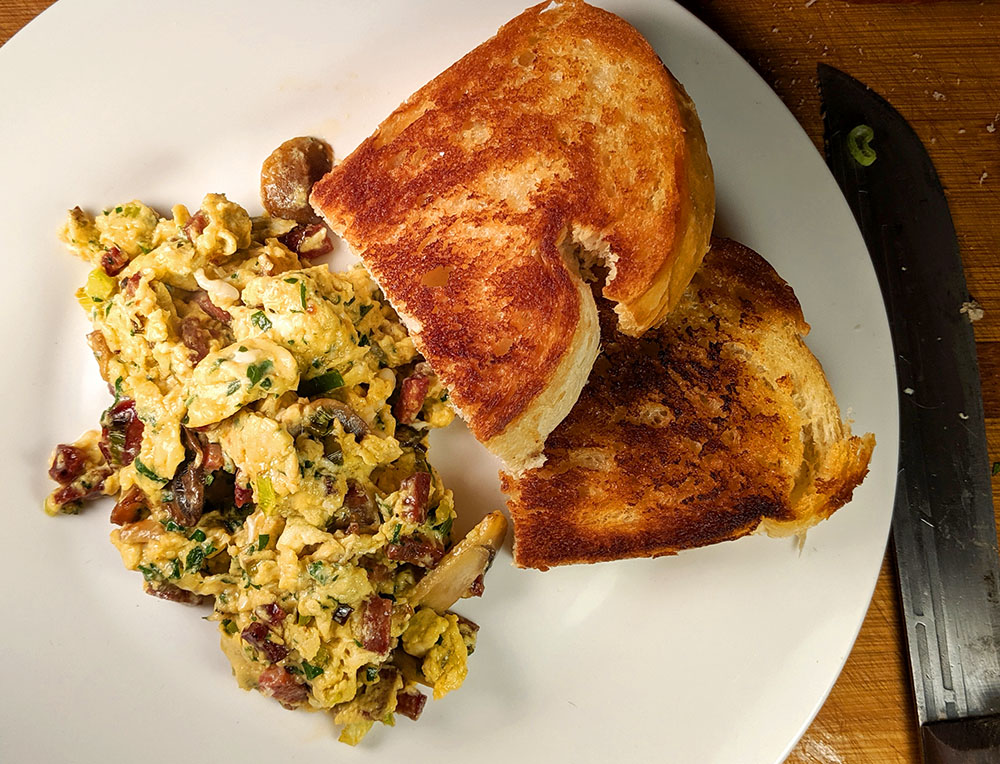 If you want to take your Hungarian cooking a few steps further, try this traditional recipe for Rakott Krumpli, a.k.a. Hungarian scalloped potatoes. And if you’re in South St. Louis and want to pick up some Bende Gyulaí Kolbasz, it’s in the refrigerated cases against the south wall of the store at Jay International. Jó étvágyat kívánunk! (Bon appetit!)