We’ve all experienced the desire for a lil’ snack. The problems arise when we can’t decide if we want chips, shrimp, or wasabi. Thanks to the cheerful workers at the Calbee company (headquartered in Japan, with production in Thailand), you no longer have an excuse for such episodes of befuddlement.

There are now wasabi shrimp chips. They are my recent discovery in the realm of snacks that rely on a flavored powder to deliver a payload to the receptors. I’ve enjoyed many brands of regular shrimp chips for years. The occasion is never less than deeply gratifying for me, despite knowing that their provenance must have been at least mildly unpleasant for the shrimp.

These crunchy, extruded things of wheat are more of a puff than a chip, and they are redolent with a shrimp-tinged dust that will have you wondering whether you’re near the shore, in the fellowship of gulls. If you close your eyes, you can almost hear the desperate screeching of sea fowl when you pulverize an extrusion in your greedy, slobbering maw.

As with any cheap snack that transports you to a faraway place, the people who make shrimp chip decisions have responded to surveys and quarterly revenue reports with executive dissatisfaction and additional flavorings. I believe I’ve seen “BBQ” and “Maui Wowee” shrimp chips, and if there isn’t a sriracha version, then someone needs to lose their job.

That brings us back to today’s item, which is shrimp chips with powdered wasabi. They have me wondering if we will one day see shrimp-flavored wasabi peas on the market, and hoping a little that we won’t.

Calbee shrimp chips are not nearly as fish-funky as those from some of the backwoods Asian brands with hand-drawn graphics. These are more of a gentleman’s shrimp chip, but I still managed to eat them. There’s just enough wasabi to let you know they aren’t just shrimp chips, but I found myself wanting more. Much more.

I generally want wasabi to pull my hair and punch me in the face, not touch me under the covers in the morning and walk away. So I got out my tube of prepared wasabi and adjusted each individual shrimp chip before ferrying it onward into oblivion. 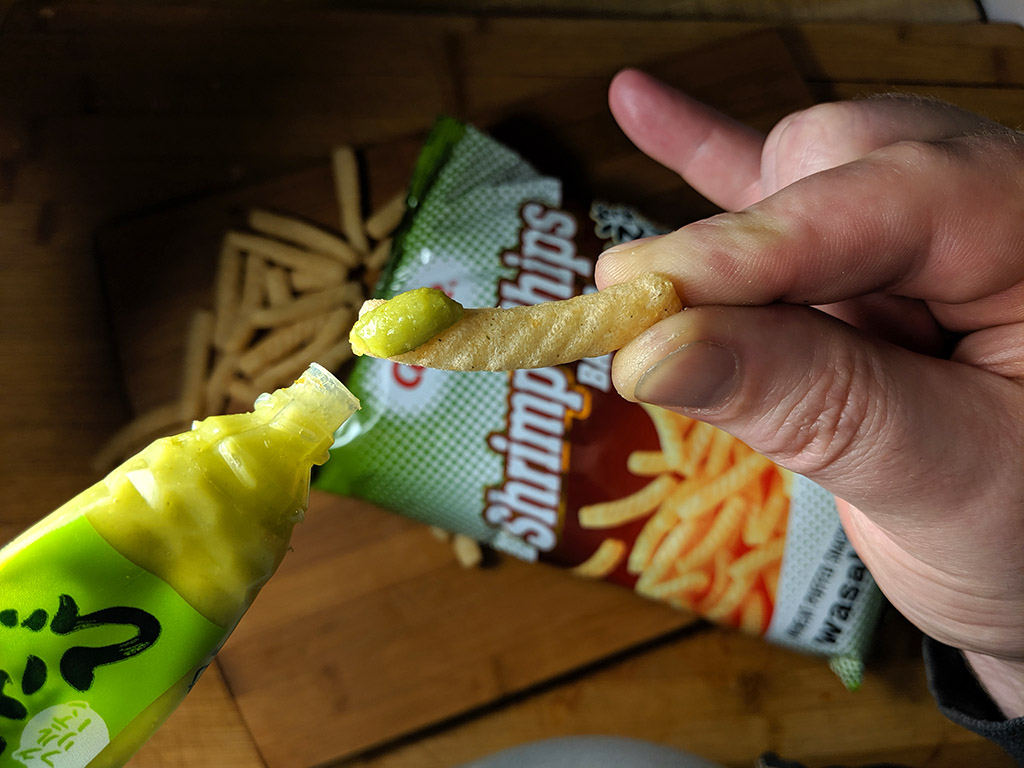 There. That’s much better.

Calbee Wasabi Shrimp Chips are, I believe, $1.49 at Jay International while supplies last. They’re at the end of Aisle 3, near the coffin freezers.