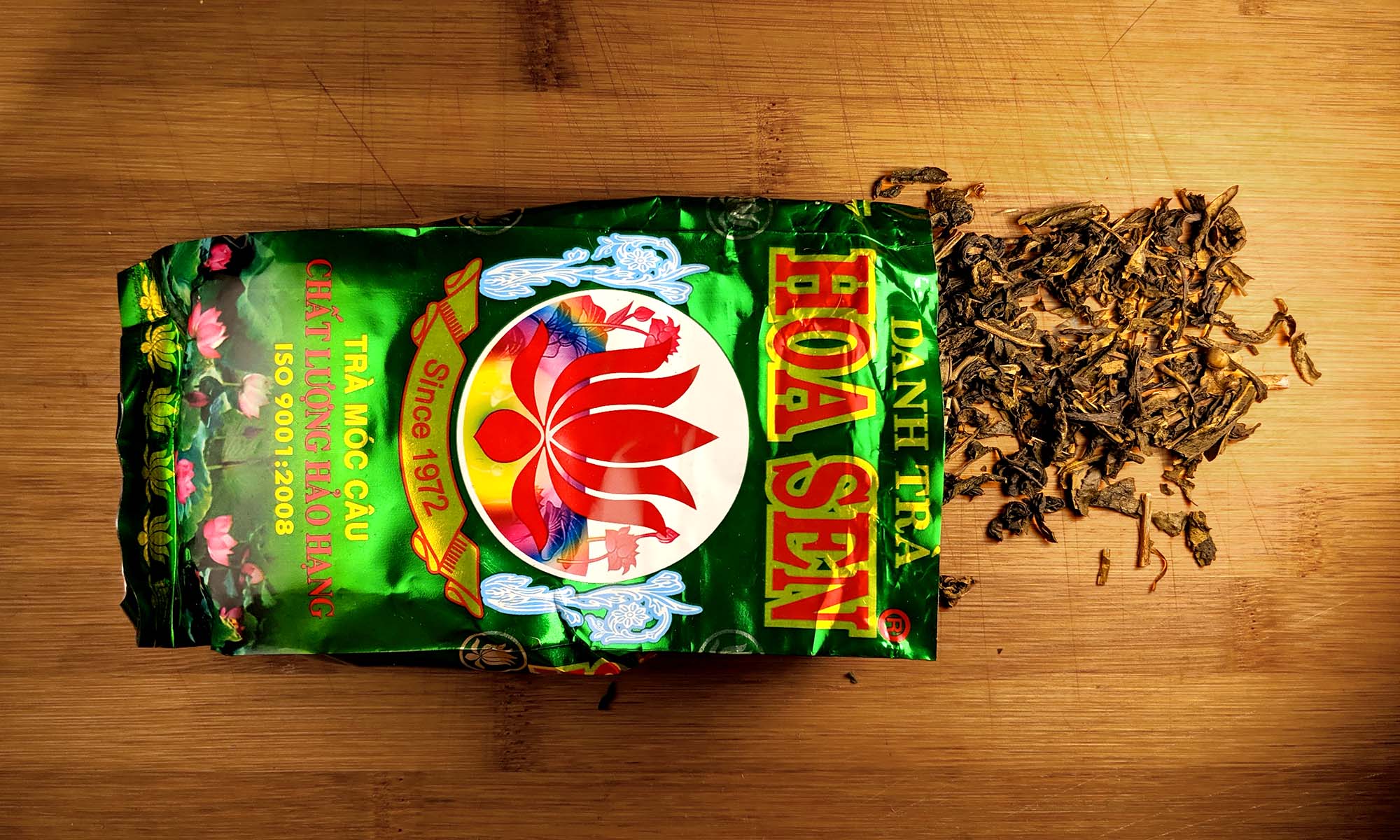 If you haven’t experienced St. Louis during the summer, I’ll do you a favor and stop at saying that it gets pretty hot. It’s going to be about 1,000,000° Celsius here today, but I have a favorite natural remedy: Danh Trà Hoa Sen. If you’re tired of water’s aggravating blandness but need a refreshing summertime beverage, this could be the brew for you.

Hoa Sen tea is a Vietnamese lotus scented green tea produced by the quizzically named Lotus Tea Co. Ltd. in Ho Chi Minh City, Vietnam. Don’t book a flight yet, St. Louisans, because you can get a 70g package of this flower tea at Jay International for $0.99.

They drink quite a bit of tea in Vietnam – especially green tea – and Vietnamese green tea is quite special. It packs a little less caffeine than Chinese green tea, but more than Japanese varieties. This makes it ideal for those who have always longed for a green tea with a median amount of caffeine.

Caffeine aside, Vietnamese tea is potent. I first sampled this brand about 15 years ago, when I lived with the legendary Freeman Brothers in their rambunctious compound on Allen Avenue. I just thought it was regular old green tea, and I steeped the whole leaves in well boiled water for about five minutes.

The first sip nearly turned me inside out. A bitter jolt rattled my corpuscles and caused my eyeballs to bulge. I took another sip to be sure of what I’d experienced. This time, I could taste how the astringent bitterness could be considered delightful. The Vietnamese, I reasoned, were on to something.

As it turns out, this style of tea is usually only steeped for about 2 minutes. This gives you a light, hay-hued brew with enough lotus flower scent to inspire the calm composition of haikus in delicate calligraphy. Brew it longer than that and you’ll be writing limericks in all caps with a Sharpie.

Some people do enjoy the bitterness. As David Bowie once said, I like it both ways. I’ve found that cold-brewing is an excellent method for this tea, as you can check the strength periodically. But you’ll want to brew a few gallons, because you can drink a lot of it in the summertime. It makes an excellent iced tea.

If you’re wondering about the taste of lotus scented green tea, it is both floral and herbal. I have described it as reminiscent of tarragon, the licorice notes of which suggest coolness to a properly working brain. This tea needs no sweetening, but as I write that I’m thinking that a strong batch mixed with sweetened condensed milk and ice could be sublime, a la Vietnamese iced coffee.

Before the heat index spikes, I’m going to run up to Jay and get some more. Also, a nice, cooling, calming sandalwood incense (they just got some in). And maybe some cucumbers and yogurt. I have learned that waging battle against the St. Louis heat requires a multi-pronged campaign.

Look for Danh Trà Hoa Sen on Jay International’s glorious Wall of Tea, just aft of the checkout lanes. The package looks like a Mexican wrestling mask. You can’t miss it.